Saturday was the opening game of the season for Exeter Chiefs Rugby Club. It was also our first game in the premiership; at home, against SW rivals Gloucester. We had a lot to prove having just joined the premiership, especially as prior to the game the bookies were giving 4-1 on favourites for us to get relegated again. Grrrr...
5 minutes in and we scored the first try of the game; the season; our premiership run, on our own home turf. Nice.
5 minutes later and Gloucester had answered with a try of their own, 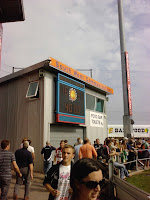 failing however to convert it. In fact I don't think their man got any of his kicks that afternoon, including one that bounced off the post. Oops!
Half time saw us nicely placed at 16-5, having gathered more points from various penalties courtesy of the kicking of Steenson. Or 'Steeeno' as he's known in the stands. :-D
Gloucester scored another try in the second half (once more unconverted) whereas we garnered our points solely courtesy of their infringements. However Chiefs gave a great second half, almost scoring a second try and seeing off the Gloucester 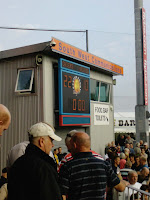 opposition; despite some mighty tackles! Suffice to say the final score of 22-10 had us gleefully mentally rubbing the bookies faces in it and looking forward to a great season ahead.
I think it's fair to say that prior to the game many of us weren't too sure how it'd go, and I certainly thought the result would be a hell of a lot closer than it was. How happy I am to be proved wrong!
If you're about when the Chiefs are playing at home I urge you to take the opportunity to see a premiership rugby game in this excellent stadium if you can. If you're further afield you'll just have to rely on my sketchy match updates!! Lol - not really, for a far more comprehensive match report see the Chiefs site, although it may be slightly more biased even than mine was! :-D
Posted by Ruthdigs at 17:33