Second soup of the weekend was a stonking roast spiced parsnip affair. Deceptively hot, it tastes as if there's a smidge of coconut milk in it (there isn't) and comes across spiced and creamy until the heat hits you after a few seconds. When feeding some to the chap to try he didn't look like he thought it was spicy enough and I told him to 'wait for it' then watched in gratification as his face changed a few seconds later. He he he :-p It's not too hot - just unexpected but deffo a good one for these cold frosty nights we've been having.
Spiced Roast Parsnip Soup
1lb trimmed peeled parsnips
2tbsp EVOO + a small splosh
0.5tsp ground turmeric
0.5tsp ground cayenne
1tsp garam masala
1tsp cumin seed
1tsp black onion seed - not necessary but I had them in the cupboard
2 sml/1large onion
2 sticks celery
1 big (mine was a baker) / 2 small spuds
1 pint veg stock
0.5 pint water
0.5 pint milk
'Dollop' (approx 1-2 tbsp) soured cream - optional
Prefeat oven to Gas 6. 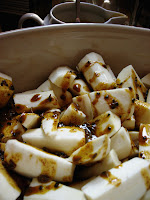 Peel and chop parsnips and put in ceramic roasting dish.
Mix the oil and spices in a jug / mug etc and pour over the parsnips. Mix really well.
Place in oven and roast for 45-60 mins. 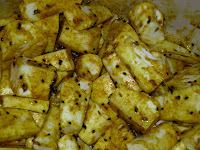 As near end of cooking time peel and chop your onion and chop the celery.
Heat a small splosh EVOO in a big pan and gently fry off the onion and celery to soften.
Chop spud into small chunks and add. 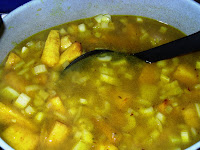 Add stock + water + parsnips.
Bring to boil then reduce heat and simmer covered for about 10 mins until veg esp. spuds soft.
Blitz in the FP until quite smooth adding soured cream as you go.
Return to pan, add milk and warm through. 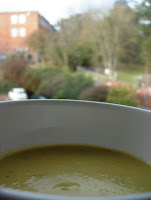 My personal version of the classic spiced / curried parsnip soup. You can adjust this to make it less hot / more hot or use your particular fave spice blend. You could even use coconut milk in place of the regular milk if wanted though I think that'd give a fairly sweet result. This is warming and filling; rich in flavours but relatively low in fat and of course - low cost to make. Yum!
Quick Found £'s update - 40p yesterday. Now have a box on the right with the latest update in so I can keep track of progress over the year. As can you. How exciting. *rolls eyes* *snort*
Posted by Ruthdigs at 11:02