A Parsnip duet - sweet music in the mouth

I made a duo of parsnip soups on sunday and I'm very pleased with how they turned out if I say so myself. They were both roasted but there all similarities end. One was a roast version of spiced parsnip soup, the other however was an idea that I've been tossing around in the back of my mind for some time. It's not one I've seen anywhere though that's not to say no-one's thought of it before - I'm resisting googling it until at least after I've posted this!
Roast Balsamic Parsnip Soup
EVOO - splosh
1lb trimmed peeled parsnips
2.5tbsp balsamic vinegar
1 small-med onion
2 sticks celery inc the leaves
1.5 pints veg stock 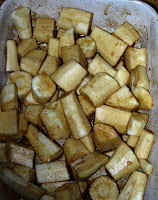 Put oven on Gas 6 to preheat. Splosh of EVOO in a ceramic dish in oven to heat up.
Peel and chop the parsnips into chunks.
Place in preheated dish and pour balsamic over - stir well.
Roast for 45mins-1 hour stirring every 15ish mins. (How long dep' on size chunks / age of your parsnip.) 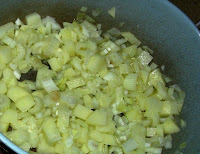 As come to end of cooking time peel and chop onion. Small splosh more EVOO in large pan and fry onion off gently.
Chop celery and add to pan. Fry both off gently for a few mins to soften up.

Add stock and chunks of parsnip - putting a little stock in the roasting dish to deglaze. Give it a good scrape to ensure you get all that lovely balsamic goodness.
Bring to boil then reduce heat and simmer covered for 10mins until all veg soft.
Remove from heat and let cool slightly then blend in batches. 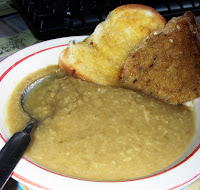 Gives a fairly thick soup so could loosen up with a little more stock if preferred.
This is actually a very simple soup to make but the taste belies this. It allows the flavour of the parsnip to come through but cuts across it at the same time; preventing it from being too sweet. I really really like this and considering I tried it as a pure experiment I'm pretty chuffed. I wouldn't complain at being served this in a gastro pub. It's pretty cheap as well; even more so if your parsnips were from the CFC at 50p for a 750g bag. :-)
Posted by Ruthdigs at 12:51