Last game of the year a win for Chiefs! 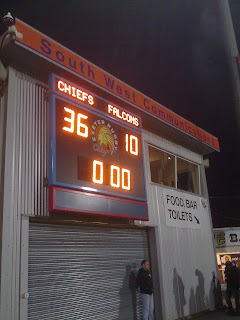 It was Chiefs' last game of the year at Sandy Park with a meeting with Newcastle Falcons for the Amlin Cup. Once again we romped away with it, securing a 36-10 victory over the visitors. A steady racking up of points cheered a cold and quieter than usual crowd. [I think we lost some supporters to the local football derby between Exeter and Plymouth on at the same time - pah - fair weather fans!] For those of us that were there though it was a 5-home-tries fest and balm for losing the previous week 24-12 away to Wasps. I was told previous to the game that due to injuries Newcastle were fielding their top team - within 20 minutes of kick off I was looking at the chap going 'really?' as they just didn't seem up to the job. Anyway, the next home game is on 2nd Jan against the might of Leicester Tigers [Ptooie]. Should be interesting! Before then there's Bath away on the 26th but unfortunately due to chrimble arrangements I'm unable to make that one. Pity as Bath's lovely but I'll be cheering them on mentally. Hoping for another good year for the Chiefs. They announced on Saturday that captain Tom Hayes had won Aviva Premiership Rugby Player of the Month for November. When you remember this includes all the guys playing internationally as well that's not bad going! Chiefs have also just been named the BBC South West's Team of the Year! Get on the Chiefs. :-D
Posted by Ruthdigs at 08:45