I so wanted to call this post 'Delish Dhal-ish' as I made a lentil dhal type of dish and as it was based on one I'd done before I was confident it'd be good and tasty. Oh dear. I decided as a change to make it with green lentils. Then I didn't have enough so it ended up half and half green and red. Now - what I didn't know then (but do now) is that red lentils are used for Dhal as they go into 'mush' more on cooking which is what's needed for this dish. Green ones don't. Also, you'll be amazed but this is the first time ever I'd cooked with green lentils myself and hmm - it was a learning curve. I think they were a wee bit underdone and after macerating my way stolidly through most of a bowlful of this I decided it really was crap. I'll give you the recipe anyway as if it's made with just red lentils it's good. I'll then tell you how I rescued this into something actually edible! :-)
Adapted from a recipe from Mary Berry - The New Cook.
Dhal-ish 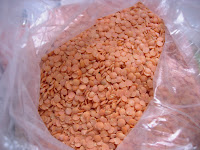 250g lentils - red ones!!
600ml water
1tsp Turmeric
1.5 tsp salt
Recipe called for 1 clove garlic and some grated fresh ginger to be added then simmer all together 20-30 mins. I substituted 0.5 tsp ground ginger and fried off 2 teaspoons minced garlic in pan first.
Add rest of ingredients and bring to boil. Reduce heat and simmer covered for 30 mins - think the green lentils still weren't quite done at this point. Don't forget to stir every so often so it doesn't stick on the bottom. 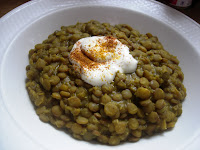 Served with a splodge of soured cream and a dust of cayenne for the colour. Looks ok huh - but really was hard work to eat and not that nice tasting. I've made this before with just red lentils and not frying the garlic off first and really enjoyed it. Strange how so little a change can produce so different a dish.
Anyway later on I decided to take my 'chuck it in and see' approach to rescuing this dish [I play pool in the same 'smack it and hope' way].
I added (these are approx amounts) 0.5-1 tsp Garam Masala, a further 0.5 tsp Turmeric, 0.5-1 tsp cayenne, 1 tsp black onion seeds, 1 pint veg stock, a large grated carrot and 'some' cous-cous. Boil the lot until the cous cous absorbs the liquid. 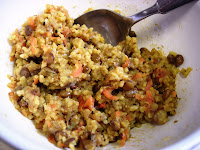 I'm not sure how correct or authentic it is to have cous cous and lentils together but as a veggie stew-consistency kinda dish (ie 'stodge'!) this was pretty nice and suitably tasty. Warming with the inclusion of the cayenne and just so much more interesting than the original version. I think the extra cooking made the green lentils rather more palatable as well; it has at least convinced me that it may actually be worth trying cooking with them again! :-)
Posted by Ruthdigs at 12:57