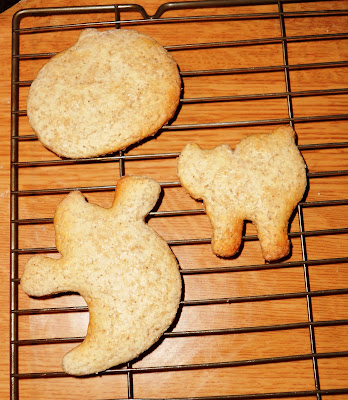 Devon Flats.  That's what these are.  I have to admit to never having heard of them until this time yesterday when I went in search of a simple and quick biscuit type recipe I could make some halloween biccies for work with.  They're very simple although my recipe differs from a purist one in that it uses double cream rather than the original clotted cream and has the addition of spices.  In these biscuits the cream takes the place of butter / other fat.  Anyway - here you are:
Halloween Devon Flats
8oz SR Flour
0.5tsp allspice / mixed spice
4oz Sugar
0.5tsp salt
1 egg - beaten
3.5 fl oz double cream (100ml if that's an easier measure)
Approx 1tbsp milk - plus extra for brushing
Vanilla sugar - optional

Put oven on to heat - the recipe I based these on said 190 which I reduced to 180 as mine's a fan oven but ended up back putting up to 190.  I think 200 would be better having scoped a few more recipes out now.  Greaseproof paper a couple of trays.  Again diff' recipes said you could grease them - I haven't tried it so can't vouch for any sticking / non-sticking using that method.   They didn't stick to plain greaseproof paper so I'm happy with that.
Sieve flour and spice into a bowl and mix sugar and salt through.
Stir in beaten egg and cream and enough of the tbsp milk to make a stiff dough.  All the recipes I saw said if it's sticky pop it in the fridge to firm up.  If like me you don't have time for this as you decided to do these at 7am before work rather than the night before like a sensible person then you can just add a wee bit more flour instead.
Roll out on a very well floured surface to just under 1cm thick.  Keep re-flouring both surface and rolling pin - these want to stick.
Cut into shapes of your choice, whack on the trays then brush with milk and sprinkle with vanilla sugar if liked.  You only need to leave a little space in between these as they spread but only a very little - they puff up more.  (Described as a cross between a cake and a biscuit.)
Stick 'em in the oven for 5-10 mins until golden-ish - mine looked quite pale but were cooked through.  May have had something to do with the temp' changes.
That's it - very easy and one of those recipes that can take endless variation.  Leave out the spice and use a tbsp of cocoa instead.  Or ground almonds.  Or - most things really.  Enjoy!  Oh - and I guess I shouldn't forget the obligatory WOOOOOoooooooOOOOOOOooooooHHHHH!!

As this is an old local recipe I'm going to enter it into Chris's 'Bloggers around the World - Great Britain' challenge.