Shortly before I was off I had my birthday. This sadly (ha) involved me having to visit various spiffing eateries and sample some damn fine meals - oh the hardship! :-D 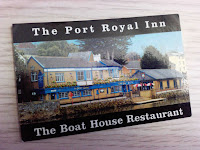