Now you may remember that last time I made Beer Bread (also the 1st time ever) I wasn't that impressed with the taste and thought this was down to the beer I'd used. This time then - lager was the way to go. This kinda came about because you know when you sit down and open a can and take one sip then that's enough - rather than wasting the stuff I figured it could become bread. Baking bread and frugality - how's that for the feel-good kudos points? :-D
The other thing I hadn't liked overly much was the stodge factor. 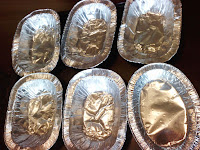 Partly this may be down to the flour as I used mostly wholemeal flour but I figured this time I'd try individual 'rolls' instead of one loaf and see if this caused any improvement. I used these little pie foils [reuse by washing and drying gently and reshaping as necessary; another frugal tip there] as the dough is too runny to shape into rolls without support. (You can also use a deep muffin tray says t'internet.)
The other thing I wanted to test out was whether there's any discernible difference or indeed advantage to using self-raising flour versus the use of plain in conjunction with baking powder. These seem to be the 2 major 'camps' in the online recipes I've found. This then is the SR Flour version.
Beer Bread #2 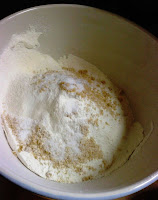 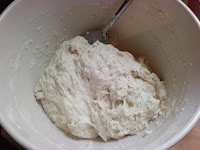 Mix lager into flour and dollop into dishes - it makes a very sticky dough.
I had a little excess butter left so brushed this on top and sprinkled with sesame seeds.
Place in oven.
Now - online recipes making 6 individual 'rolls' stated anything from 35-45 mins but mine still took the same time as a full loaf at a good 50 mins. Test with a skewer and once it comes out clean and they're a golden brown on top they should be done. 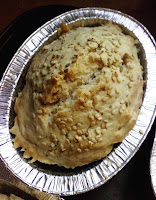 Let them cool in the dishes for a few mins before turning out onto a cooling rack. At this point a tap on the base that gives back a hollow sound will also confirm 'doneness'.
These are good warm with a little butter and cheese. I added the oregano on a whim but not sure it added that much.
The bread was a vast improvement on the last time I tried this, I really think the key is to use a flavourless lager for it. They rolls were well aerated and not stodgy at all so what remains to be seen is the difference between this batch and the plain flour & baking powder combo.
As a cheaty super quick way of making bread though this recipe is really starting to win me over. Next time you're left with some cans of 'cooking lager' after a party that no-one will touch, including the person who brought them, you know what to do! :-)
Posted by Ruthdigs at 13:27