A rare bit of Welshness

No - I don't mean an underdone slice of lamb but the cheese / beer / mustard / bread concoction that seems to have passed me by most of my life. Now you'd think a cheese fiend like me would have virtually been brought up on this posh cousin to the humble slice of cheese on toast but no - until a recent visit to a certain HFW's canteen [more of that later] I'd never had it before let alone made it myself.
1st job - find a recipe. Ought to be easy surely, especially with a shelf stuffed with cookery tomes like mine, but was there a rarebit to be seen? Was there buggery. After 20 minutes fruitless searching - including checking the index of "Winning Ways With Cheese" at least 3 times thinking 'if any book will have it surely this one must' I remembered the 'Welsh' part of the name and thereafter things moved rather more swiftly on. ;-)


I adapted the recipe from WWwC - incidentally a fantastic book - so very very of it's time. It's beautifully photographed in 1980's brown and orange and features a somewhat younger and frillier Mary Berry as the judge of what was the tie-in title to a National Cheese Board competition. Brilliant piece of social history! You probably wouldn't make a lot of the recipes though... [Incidentally I remember that Union Jack made of cheese logo with great fondness. Todays British Cheese Board seem to have done away with it. :-( ]


Rarebit - the Welsh one [This makes a fair bit - enough for a whole short baguette sliced in half and another roll.]
1oz butter - softened (zap in the microwave for a few secs)


Mix everything bar the tomato together. That's kinda it - other recipes fiddle about with roux and eggs and what have you but this is pretty simple and adapta 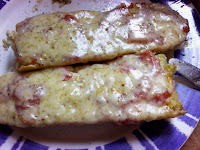 ble I think. I may try it with mushroom ketchup in place of the worcestershire sauce next time.
Anyway - what I did with mine was use it on part baked baguettes; as I baked them off I sliced a large vine tomato, sprinkled the slices with a little salt and pepper and chucked in the oven for 5ish mins. [Watch the salt as mature cheese can be surprisingly salty I find. It helps draw the juices out of the tom though so I think you need a bit.]
Slice baguettes in half, lay tom slices on, cover with cheese mixture and pop under the grill to melt.
Nice, easy, tasty. Not the healthiest snack maybe but I'll leave that up to your own conscience. :-D
As this is Welsh in origin I'm going to submit it to Chris's 'Bloggers Around the World - Great Britain'.