This soup came about through me watching the Channel 4 programme 'Lakes on a Plate'. Basic premise is bloke traipses round the Lake District cooking a few bits as he goes. Not the most cohesive of programmes I thought but pleasant enough idle daytime watching. This recipe was from an episode in week 4 - have to say looking at the C4 website seems like all the other weeks sounded far more interesting and local-food based which is what I imagined on seeing the title of the programme.
Anyway, the presenter chap served this soup up on there to the CEO of the Vegan society and it sounded a) tasty and b) simple so I thought I'd give it a go. I went from the recipe as given on the programme which differed from that which I've now seen on the C4 site as you will see.
Roasted Onion Soup
3 large and 1 med onion (Prog' suggested 6-8 smaller ones)
2 bulbs garlic
2 pints veg stock
1 tbsp flour
S+P 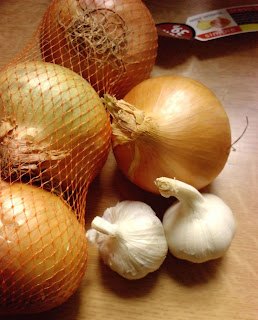 Preheat oven to gas 5-6. (Mine was at 5 as I had another lot of beer bread in but more of that later.)
Place onions and garlic whole; with some skin left on, in a roasting dish. Roast 45 mins - 1 hour depending on your oven and size of onion - until softened and 'squidgy.' Let cool.
Place stock in a pan. Whisk the flour into the stock really well.
Once the onions and garlic are cool enough to handle snip off the base with scissors and squeeze the innards out into the pan. This bit's messy! [Tip - when washing your hands after handling garlic always use cold water as hot water 'cooks' the smell onto your skin.]
Blend well with either a stick blender or FP. Add lots of freshly ground black pepper and return to pan.
Bring to a boil and simmer for 5-10 mins.
Now don't - like me, taste this after the blending and think "yeurgh - how disappointingly bitter and raw tasting." Wait until it's cooked on the hob and it transforms into a 'golden' tasting soup.
That said... I did after half a bowl conclude this was a bit one-dimensional as a soup. It needs something else to give it depth. As a base for an onion gravy or something it'd be good though, I even thought you could freeze smallish amounts for a 'stew starter.'
The Channel 4 site recipe has the addition of olive oil, thyme and rosemary at the roasting stage. I'm not convinced this'd add enough to elevate this to something I'd do again as a soup.
The stew base idea lurking in the freezer though - that's a possibility when the onions are cheap. (These were the Aldi Super 6 39p for 3 big 'uns deal from last week - still on now!)
Posted by Ruthdigs at 10:22