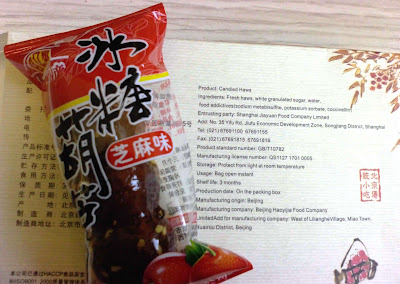 Brought back from China - Candied Haws. Apparently. They were a lot bigger than what we'd know as haws, more like cherries so whether this is down to different species or mistranslation I'm not sure. I liked the inclusion of 'food addictives' on the ingredients though, and the information that 'Usage: Bag open instant' which seems an elegantly minimalist was of saying it to me. :-D
Where we can forgive the 'food addictives' from a non-native speaker translating a box of sweets, this inclusion of 'Steak 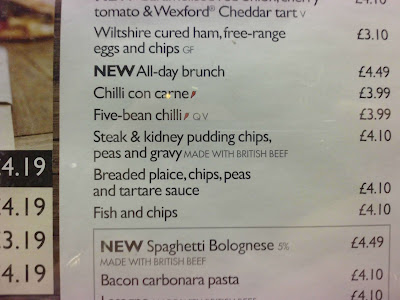 & Kidney Pudding Chips' on a Wetherspoon's menu made me unable to decide between laughter and a wry shake of the head at the appalling lack of standards written English seems to have sunk to. Whilst not wanting to sound like the punctuation police it did conjure up a somewhat bizarre mental image where Heston Blumenthal has got his hands on the humble chip and injected it with S&K pudding extract or something along those lines. Anyway, it does irk me that something that's been professionally printed has not been proof-read properly and spotting spelling mistakes and such like on menus is almost a hobby of mine. By that I mean that I don't set out to do it I just can't help spotting them. Not to say that I never make any myself but if it's for your menu, i.e. what diners first judge the food by, surely a little care is in order?
[If like me you weren't taught proper usage of apostrophes at school because evidently there's no point knowing stuff like that anymore (how old do I sound?) try here. It tells you pretty much all you need to know on the front page; which does make me wonder why they couldn't have spent an hour at school covering it...]
Posted by Ruthdigs at 15:22