Saturday I woke up and with a mournful cry realised the house was bereft of bread for my breakfast egg with soldiers - disaster! Given that the weekend is about the only time I bother with breakfast it's a bit of a 'treat' chillin thing for me so a lack of toasty soldiers deffo put the damper on the whole thing. I decided to whip up this easy bread I've been meaning to try, figuring it could bake whilst I performed my morning ablutions.

Now - Beer Bread seems to be one of those things that one whole nation of people know all about but is unheard of (by me anyway) outside of there. Beer Bread is American. Very. It sounded a fantastic idea - in it's purest form is self-raising flour and beer. That's it. Stir it in and chuck it in the oven, no proving, no kneading - brilliant! Having done a little research I found recipes ranging from the basic 2 ingredients listed above to those with the addition of sugar, salt, melted butter etc etc. I decided to go fairly basic with mine; just adding a little cheese and some seeds. 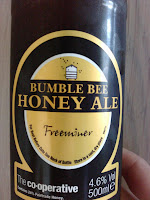 Preheat oven to Gas 5/190 c/375 F. Grease loaf tin very well.
Sift flour into mixing bowl and add beer. Mix together really well. Add 2tsp seeds and stir in. [I would have added other seeds had I had any in the house - chuck in what you like basically.] Grate cheese and mix in well.
Pour mix into tin and sprinkle reserved seeds over top.
Bake 50 mins. Melt butter in microwave and pour over top of loaf. Return to o 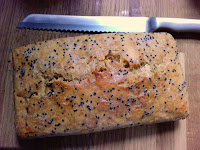 ven for a further 5 mins.

Gave a pleasingly golden looking loaf, although mine could perhaps have done with an ince more cooking time. Being new to bread baking I'm still sussing out my oven's idiosyncracies for this type of cooking.


Now - although the loaf looked good I wasn't vastly over enamoured with the taste. I think that the taste of the beer came through a little too much. Given that this is an American reci

pe which means beer can mean lager; as well as actual ale, I think that I'll try this with a tasteless lager next time. I know that it doesn't need the yeast in a bottle conditioned ale to work as one of the first recipes I found mentioned they used Budweiser to make it with.

I'll be finishing the rest off with soup so it buries the taste somewhat. ;-)
Posted by Ruthdigs at 12:37