Inspired by luscious images of various potato combos yesterday I went home determined to make a delish dish for dinner. Armed with my freebie pot of cheese spread I perused a couple of dauphinoise recipes and came up with my own version. What follows is the recipe as I made it, followed by amendments if I was doing it again. Not half bad in the end though! 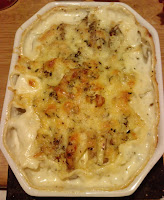 Preheat oven Gas 5 / 190c.
Parboil spuds 10 mins until just softening. Drain and rinse in cold water to cool down.
Finely chop onion. Finely chop and crush garlic. Put both in pan with the milk, cream and black pepper. Gently warm and stir in the cheese spread to melt it through. Bring to a gentle simmer for 5 mins to soften the onion. Keep a close eye on it to ensure it doesn't boil over!
Remove from heat and stir in basil and nutmeg. [I forgot to do this so sprinkled them over the dish after pouring the cream in!] 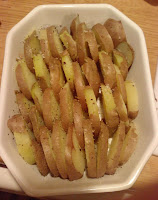 Slice potatoes thinly - approx 3-5mm. Butter your oven dish - to be honest I forgot to do this and I'm not sure how much difference it actually makes. Stand slices in dish on edge, building up row by row. Season with S + P. Carefully pour the cream over, leaving space in the top of the dish for bubbling in the oven. [This is the point at which I remembered the basil and nutmeg and hastily sprinkled them over the top instead.] 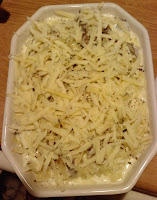 Grate cheese over and bake in oven 30ish mins. As previously mentioned I used Cornish Yarg, a lovely cheese with a softer flavour than the mature cheddar which was the other choice in my fridge. It's wrapped in nettle leaves too!


Now I found I had too much sauce so would make it more like a total liquid content of 150ml next time. You could just use 150ml of straight double cream but I think that would be too rich and cloying with all the cheese spread added so I'll try 100ml dbl cream + 50 ml milk next time.
I'd also reduce the amount of onion - using half a small onion or perhaps just 1-2 shallots.
I also found my potatoes were very slightly less cooked than I like after 30 mins so would add another 5-10 mins to the cooking time.
Anyway - I found it tasty, filling and rather comforting on a chilly evening with enough left for another 2 portions. If you try it let me know what you think - enjoy!
Posted by Ruthdigs at 13:31