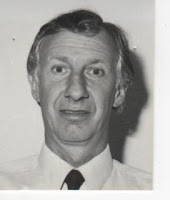 Now ensconced back in the familial home, here for mother's birthday and mother's day this sunday. She liked her 'Front Garden Repair Kit' I bought all those seeds for (and you thought they were for me didn't you?!) so hopefully soon the garden will return to the riot of colour it once was.
This photo is an old passport photo of my father; probably taken late 70's, that I had on a board here. Sometimes the past ambushes you rather. Still miss you dad.
Anyway, speaking of seeds (addicted - I know) if you have a Range store near you they have bogof at the moment on their 99p De Ree packs. This includes Runner Bean 'painted lady' which is the pretty two tone one. These are in packs of 9 seeds (kids pack) but coming out at 18 for 99p it's rather better than T&M's £3.49 for 50 or Mr Fothergills £2.99 for 40. They aren't available on line though, you have to visit the store.
Posted by Ruthdigs at 08:52