At the weekend we visited Brixham for the Christmas Market. My it was blimmin' parky with a howling East wind whistling off the sea and up through the narrow streets of this small fishing town. No snow though so let's be thankful for that.

The market was in a big marquee so we were sheltered whilst in there, it was pretty busy as well so not too chilly. There were craft stalls, cakes, cheese, deli products, clothes and some parrots! Many lovely handmade items and I was really pleasantly surprised at the prices.
I realised once we got there that I haven't actually thought about who I need to get anything for but we enjoyed browsing round, starting off with a mulled wine and mince pie from local concern, the Lytehouse. This is a coffee shop / bar which is on the high street of Brixham. [According to the link they specialise in Tapas but as we only saw them at the stall I can't comment on that.] I can vouch for the friendly nature of the guy who served us though, who I presume is the owner. Thanks!
Wandering round I soon spotted some 'lovely things' [see 'Absolutely

Fabulous' for why I would put this in '_'s] and after asking took this photo. The lady asked me if I was planning on making some but instead I bought some from her - they were only £1 each after all!
Next spot was these lovely metal tags, also £1 each and from the same stall some silver metal stars and hearts ornaments at a grand 50p a go. I'll have to post a pic of those tomorow. 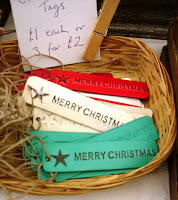 We also got some cheeses - Cornish Yarg and Devon Blue from 'Cheezeboard' and some indian bite things (bhaji, pakora &c) from 'The Veggie Deli' stall, along with a frozen nut roast in a foil box for Sunday roast. Oh - and another ornament; a pretty filigree cut felt star with little beads inset for a grand total of 75p. Another pic for tomorrow.
Leaving the marquee there was a seond small market on in a nearby hall - this one all in aid of the RNLI and complete with brass band. That did make me feel nice and festive I must admit.
I've been on the look out for a hat in recent weeks, favouring something quite plain. There were some hand knitted ones on a stall but on closer inspection they either had chunky cable patterns on, or an edge of bright pink (not me) or a massive fluffy bobble (also really not me) that put me off them. Then - tadaa - a nice cream number with a little red stripe was unearthed near the bottom of the pile and - well, I'm now fully hat-equipped. Damn - another pic for tomorrow as well then! This hat was the grand cost of £1.50 which I think is pretty bloody good for a hand made brand new item. Gotta love those charity old ladies. Couple of other bits I got was a jar of quince jelly (£1.50) and a pretty silver bauble (20p) along with some little satin ones for re-purposing (55p). All in all not a bad haul.
We had a fun day even if Brixham was; as mentioned, decidedly on the chilly side thanks to the wind. [I was very glad of my new hat by the end.] As we wondered round the town I spotted some of those things that make you pause and smile and thought I'd share them with you.
Lobster on the roof of a seafood cafe: 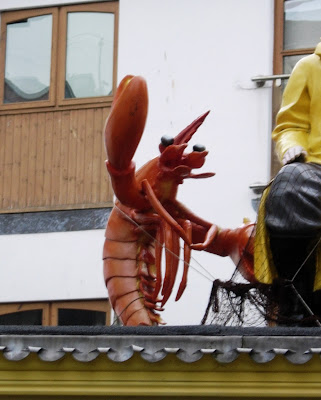 Cow outside the butchers: 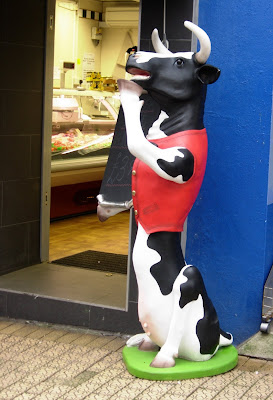 Who would want to cycle up this??! 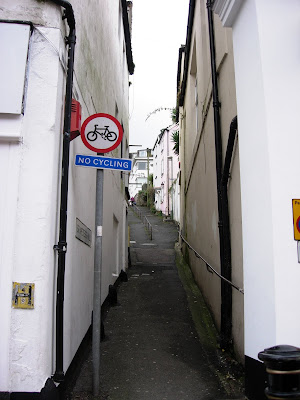 Finally; some heartfelt graffiti. If you live anywhere frequented by seagulls you can appreciate the sentiment!! :-D 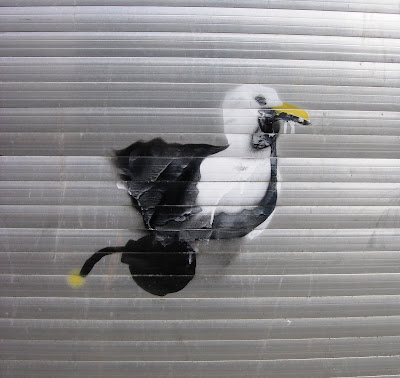