I know, I know, I should be writing for a parish magazine with titles like that eh? It's more of a wry nod to Red Dwarf than a crap pun all of my own though, honest.
Anyway, I made 2 lots of soup on Sunday; an Iranian Barley soup and a Leek, Potato and Stilton one. The Iranian one I've been meaning to try for some time whereas the other's a recipe I've made before and I had leeks to be used up in the fridge. As the barley effort takes a long time simmering I thought I could make the other in between as it were. I'll post them seperately to avoid any confusion though. Most likely mine rather than yours... ;-p
Ash-e-jow, Iranian barley soup
2 tbsp EVOO
2 onions
1 litre veg stock*
0.5 litre water*
0.5 tsp black pepper
1tsp turmeric
1tbsp parsley - dried [or mint but I used parsley]
1 cup pearl barley
0.5 cup lentils [I used green]
Put oil in big soup pan and put on low-medium heat. Chop onions and add to oil.
Put kettle on.
Cook onions for a few mins to soften.
*Recipe calls for plain water but I was a little concerned at that as I thought it may give a bit of a bland dish so I made mine with 1.5l water and 2 cubes designe 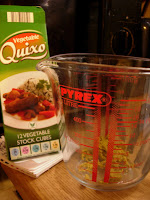 d to make 450ml (or near enough 0.5l) stock each. So in essence 1 litre veg stock and 0.5 litre plain boiling water. Whichever way you want to do it add this now. [You may want to try with 1 stock cube and taste further on in the cooking process to see if you think it needs the second cube. I used Quixo veg stock cubes from Aldi as seen in this pic, I find they're not so distinctive in flavour as Oxo's. Previously discussed here and since down in price to a bargainous 65p for 12.]
Add the rest of the ingredients and bring to a boil.
Reduce to a simmer and simmer covered or 1.5 hours. Stir every so often.
Expect it to get thick and frankly not very soup like to my western eye.
Hmm - I was hoping for more from this I must admit. It was nice and simple so bonus points there - another time-frugal thing really, though you must stir it so it doesn't stick on the bottom of the pan. I just thought it a bit lacking on flavour really, it needs something extra. Looking at some reviews on another site it seems some people agree with me. What I may try is adding the half tin of chopped toms I've got in the fridge and some extra spices with a squeeze of lemon and see what that gives us. Hey ho, we have to try these things!
Posted by Ruthdigs at 14:05