The Full Brekkie Pancake - you saw it here first!

Having a hankering for pancakes (savoury, not the sweet kind) for breakfast I started thinking - why not just include the mushrooms and cheese in the mix rather than adding after and then rolling as I would normally do. Thus was the Full Brekkie Pancake born!!!

Put oil in pan to heat. Chop mushrooms up into smallish [remember they shrink on cooking] bits and add to pan. Add a pinch / to taste of tarragon / your fave herb and a little salt.
Whilst the mushrooms cook whisk together the egg & milk and season.
Stir in the oats then whisk in the flour bit by bit trying to ensure there's no lumps of flour.
Stir in the grated cheese.
Check mushrooms - you want to cook them fairly dry rather than have them soggy in the middle of a pancake. I cooked with the lid on the pan to start with to ensure they 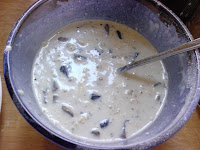 softened up rather than going orange and charred [I personally can't stand mushrooms like this] then removed the lid to evaporate off the moisture.
Stir mushrooms into batter mix. You'll have an unappetising lumpy slightly grey mix at this point.
Regrease pan and bring back up to heat.
Cook as you would pancakes normally, spreading mix on first contact with pan to ensure an even distribution of the 'bits'.
Serve.
You can eat plain or spread a little chutney or chilli jelly &c &c &c over and roll up. However you fancy it really. 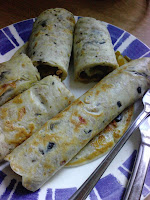 The verdict - it's an idea with potential but next time I'd forget the *oats. They just made the whole thing too heavy and stodgy to my mind. Due to the thickness of the batter this recipe only yielded 3 pancakes which made each one fairly thick and weighty. Again due to the oats, these drank up the salt so need seasoning generously if you make them with the oats in. I think I’d make it a large handful of cheese next time too! Worth refining though so watch this space, the FBP will be back! :-D
*If omitting the oats use 4 oz flour instead of 3.
Posted by Ruthdigs at 14:04