The second soup I made is a good one to use up veg and cheese languishing in the fridge. The recipe is here, and incidentally the man behind that site wrote the very useful 'Vegetable Growing Month by Month' which I can thoroughly recommend along with this soup recipe from his wife.


Put EVOO in big pan and put on low-med heat. 1-2 tbsps-ish.
Chop onions and crush and chop garlic and add to pan.
Chop leeks - washing free of grit as necessary, and add.
Cook for a few minutes to soften. 5-10 should do it nicely.
Peel spud if wanted - I actually did this time rather than have bits of skin in the soup. Chop into smallish chunks and add to pot.
Add Bouquet Garni [recipe said bay leaves but I was out] and a good grind of black pepper.
Add milk / buttermilk and bring to boil.
Add veg stock and return to boil.
Simmer covered for 15 mins until potatoes and veg soft. 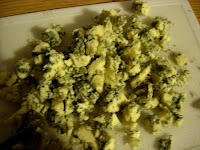 Add cheese and stir in.

Blend in batches, unless your FP is huge!
Taste and add salt if necessary.
A winner - as previously mentioned on yesterdays post I've made this before. I love leek and potato soup - it's one of my faves and the addition of stilton here gives it a nice flavour without being overpowering. Thick and creamy whilst only actually having half a pint of milk in [mine's semi-skimmed] this is pretty healthy. A go 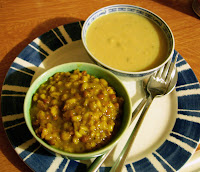 od winter soup you could add extra stock or make with just stock and no milk as a lighter option for summer. It's very good chilled too - as I discovered when taking from fridge to bowl to microwave for lunch at work. Yum!
Pic of both soups - as you can see the Iranian Barley one turned out pretty thick rather than 'soup' like. More stew consistency but in the winter that's no bad thing.