Brekkie fit for a PM...if we had one. 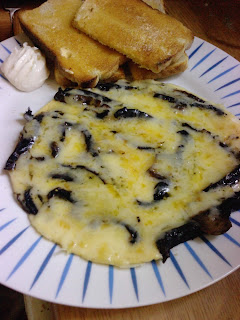 Well, it's now the morning of the day after the great debacle that was the latest general election [or it was when I made this brekkie and post - updating later gets confusing huh?] and - surprise - we have a hung parliament. Which as far as I can see means naff all will happen for a bit longer - so the difference is?...
Anyway, I made this rather scrummy omelette with a couple of the aforementioned flat field mushrooms from Stokes, some tarragon, 1 egg, a smidge of dbl cream, S&P and cheese melted on top. Served with buttered toast and a dollop of mayo on the side it's not the healthiest of brekkies but substantial enough to keep me sustained through a morning of...well...er...'news' telling me the country was...well...er...'undecided'. That's those that got to vote of course. Those not turned away at the door because the system/people couldn't cope or they'd run out of ballot papers [!!!] or people were taking 25-30 mins to vote. (Surely you've made up your mind by that point? I mean - what can you do in there for that long? "Eeny, meeny, miny, mo...")
I must admit though there was the odd enjoyable moment in the coverage. The first ever Green got in -go those crazy kids in Brighton! Several declarations I saw had booing when the BNP [hwaak-ptuh] result was read (and they lost all their seats :-D ). Best of all though was the comedy gold duo of Jeremy Paxman and Boris Johnson - is there anyone better for comedic value than those two together? Throw in Ian Hislop and I'll never complain about the licence fee again, promise.
Posted by Ruthdigs at 08:49