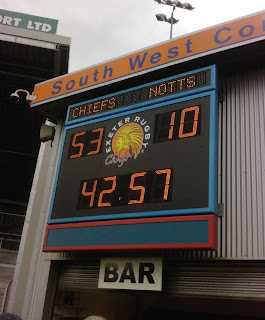 Chiefs being Exeter Chiefs - the local rugby union team. We're currently in the Championship which is one down from the top flight Premiership. They've switched to a new play-off format this season with the winner of Group A playing the 2nd placed team in Group B and vice versa. Basically we were through to the Semi final unless Nottingham beat us by 50 odd points but a win for us meant we got to pick a home semi for the following Sat 8th May. Well, we won pretty convincingly as the score board shows. I felt a little embarassed for Nottingham as their only try was a penalty try - not even a true 'run the ball over the line' try. Ah well. Onwards for us and the prospect of the semi final at home against Bedford in a weeks time. If we get through that then the final is most likely to be against Bristol. They came down last season and unfortunately for the last few years it's held true that whoever comes down one season seems to invariably go back up the next; a cycle we'd truly like to break this year. Fingers x-ed!
Posted by Ruthdigs at 13:49