The all important semi-final was here. Would we make it through for a chance to prove ourselves in the 2 legged final and beat Bristol for a chance at the Premiership? Damn we hoped so!
Bristol had easily beaten London Welsh on the Friday night so we knew they would be the foe to face in the final. Having the most points over the season they got choice of home / away for the legs and had opted for away first followed by home meaning if we won today we'd be seeing them at the Chiefs ground for the first leg weds 19.05.10.
First however - we needed to win... 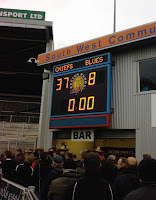 Well - it was a bit of a one sided try fest for us again much like last week. Like last week our opponents; the Bedford Blues only had a penalty given 3 points most of the game. Like last week they got a try near the end (but didn't convert it). This time theirs was a 'proper' try though and very well done too. We won comfortably 37-8 this time as attested to by the score board here.
One of their players was unfortunately stretchered off the pitch after being knocked out cold by a tackle. I wish him well.
Now - bring on Bristol!! The games this time are mid-week evening games, not ideal for your average supporter especially with one leg being played away, I suspect the insidious fingers of the TV people there. At least it's only Bristol though, it could have been Doncaster!
Well - what do a lot of sports fans that have been thirst-quenching all afternoon need on a Saturday evening? That's right - a curry! My friend shouted me a lovely indian with some of our fellow spectators at The Ganges in Exeter. I've been here before but some time ago and it's been recently refitted. I have to say the interior is stylish and welcoming and the food was great. Service was polite and generally fast, except when our first drink order got lost in translation! I had the veggie Palak Kootu; a spinach, coconut and dal (lentil) dish with mustard, garlic and curry leaves. It was truly lovely with the mushroom rice I also ordered. Probably didn't need Saag Aloo with it but myself and my friend are addicted to this (he espec 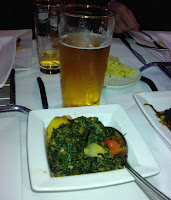 ially so since a stag night he was on where the groom stole his and only owned up after my friend had argued with the waiter) so if there's Saag Aloo available, and especially if there's a dearth of spinach deficient welsh stags about, we will order it. We even took a photo to send the aforementioned offending welshman. :-D Cost us £115 inc tip for 5 of us; 2 drinks each, poppodums with dips, main, 4 x rice, 3 x veg and 2 x peshwari naan so not too bad for a restaurant meal either. Thoroughly enjoyed and recommended if you need somewhere in the area.
Posted by Ruthdigs at 18:00