As it was a bit cold and miserable and I'm still feeling a bit under the weather I decided to make this nice sounding soup from the Veg Inspirations blog. I had meant to make it Weds eve but didn't get round to it so did it last night instead. I put the beans on to soak before leaving for work Weds morning. I bought dried Haricot beans from the Weigh & Save, first time ever I've used dried beans! Hated pulses when I was younger though so it was a long time before I'd consider buying them in any form let alone dried. They're a very frugal way of buying an ingredient though being only 19p per 100g. The recipe called for a cup which by chance was exactly what I had - 150g for a measly 29p. Not bad. Here's how I made it; mostly following the recipe just with a couple of ingredient substitutions where I didn't have the stated item

Bean & Barley Soup
1 cup dried beans - I used Haricot
1 onion
1 tsp gound ginger [I used this as I didn't have any root ginger in the house]
0.5 cup pearled barley
2 tomatoes
2 carrots
1.5 cup sweetcorn
4 bay leaves
1 tsp cayenne peppper [I used in place of chilli powder]
2tsp cumin seeds [recipe called for powder but I only had the seeds]
4 cups (1 litre) veg stock, I used Marigold Bouillon
2 tbsp oil
4tsp lime juice
Soak beans overnight / day time with pinch of soda.
Drain, place in a large pan with fresh water and boil until soft but not mushy. After their 2 days of soaking my beans had 50mins boiling which was possible slightly over, 45mins may have been better. Drain and reserve.
Rinse pearl barley off and reserve. 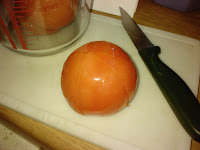 Score toms all way round through skin 2x as if cutting into quarters. Cover with boiling water and leave. This will enable you to remove the skin.
Heat oil and fry finely chopped onions gently until approaching transparency. Add ginger and stir.
Skin toms and chop into small bits, add to pan and cook until soft, stirring occasionally.
Add bay leaves and spices and stir. 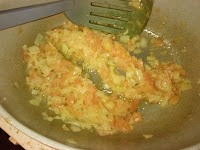 Add carrots, sweetcorn, pearly barley and stock. Bring to a gently simmer until veg / barley cooked. Mine had 20mins.
Add beans and stir well. Simmer for 15 mins to amalgamate flavours.
Remove from heat and add the lime juice. Stir through and serve.
A hearty looking soup however I was a little disappointed by how this tasted. First off next time I would halve the amount of cayenne / chilli pepper used. I like a little heat but I also like to taste the flavours in my food and all I was getting was chilli. 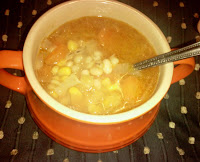 I kept my pan covered whilst cooking, and as a result the soup was a bit more watery than I expected and the broth part not particularly flavoured (except with chilli) so next time I'd leave the pan uncovered at least to start with and see how it went. I also think that this is an occasion where I'd be tempted to use the deeper flavoured OXO veg stock cubes as I feel they'd stand up better.
I like a bit more crunch to my carrots so I'd add these at the same time as the beans. I'd also double the amount of them in the recipe, ditto the toms; there didn't seem to be a lot of point to their presence.
As I was using cumin seeds rather than powder I really should have added these with the onions to get more flavour from them. I'd halve the amount of oil used to saute the onions.
I ended up adding milk to this after cooking to temper the chilli a little. I added 100ml to 3/4 of the total amount of the soup as left in the pot. I also added a handful of oats to soak up some of the liquid and hopefully some of the chilli. Later in the evening I mashed the beans in a bit to thicken the broth part; although that may be more because I overboiled them in the first place!
Had a second portion for lunch today and it was improved. I know the original recipe says serves 3 but I got 4 generous portions from this (2 in the freezer) and I didn't even have bread with it last night. If you served this as a starter with bread I reckon you could do 6 easy.
Verdict - nice but not as nice as I expected. Needs tweaking to suit my tastes.
Re: Dried Beans - easy just time consuming for the cooking. Cheap although I wonder how much extra power I used for the long cooking time.
Posted by Ruthdigs at 14:01