I had planned on soup last night. [Yes - actually last night - I finally caught up!] I was feeling a bit like a mahoosive cold was bearing down on me as the day wore on and thought soup would be the ideal solace whilst I nested on the sofa and felt generally sorry for myself. However, not getting home until 7.30 then by the time I'd faffed about I'd lost nearly another hour I was really no longer in the mood for lots of chopping and messing about so I turned my thoughts to what I could chuck together quickly and easily and then for preference, bung in the oven. This was what I came up with.

Preheat oven to Gas 6 / 200c. Butter oven dish.
Cook spinach. Meanwhile make up stuffing to pack instructions.
Drain spinach really well once done; I used a sieve and pressed the excess water out with the back of a spoon.
Mix well with the stuffing. 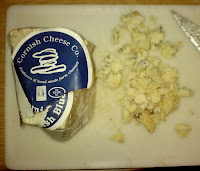 Roughly chop / crumble the blue cheese and mix in a little at a time until you achieve your desired taste. You may want to add more if you're a real blue cheese fiend but I just wanted it to offset the spinach nicely but not dominate; as mentioned I used 1.5 oz of a Cornish Blue, a fairly mild cheese though it has been in the fridge maturing a while.
Grind in some Black Pepper and mix thoroughly.

Tip into prepared oven dish and smooth evenly with the back of a spoon. Place in oven and bake for 30-45 mins until golden and as set as you want. Keep an eye to ensure the top isn't burning - if necessary cover with foil.

I baked mine for 30 mins as that's what the pack said for the stuffing mix but it was still pretty sloppy at the end of that time. if 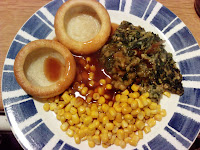 I did this again I'd either bake for longer or possibly add a little oats to the mix to help soak up the extra liquid from the spinach and cheese. Tasty though and not overly salty like the last time I used this mix.
I served this up with comforting yorkshire puds, sweetcorn and gravy. Very nice it was too!
Posted by Ruthdigs at 14:53