I wanted to try one of the handful of recipes involving oatmeal that I had searched out in the interests of this months frugality. Oatmeal is not just for porridge and flapjacks! Oh no, it can thicken and bulk out a soup or stew, make a tasty veggie roast stuffing dish and even form a crumble on a sweet or savoury dish.
I had come across this recipe in the WW2 section of the interesting 'History Cook Book' resource. Wartime recipes had to be pretty frugal but still generally utilised lots of fresh veg. I changed their recipe a little to make it veggie and because I (erroneously) thought I had no paprika, and I added dumplings on a whim. Hadn't had dumplings in months and they're so simple. Perhaps not the most summery of recipes but it hasn't been the most summery of Mays and Sunday (when I made this) was cold and rainy.
Veg & Oatmeal Stew
1lb mixed root veg
Decent splosh olive oil and/or knob butter
2oz oatmeal
Cayenne
Dried herbs
S & P
2 tbsp Mushroom Ketchup
1 pint veg stock 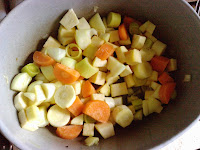 Peel veg as necessary and dice. I used 1 onion, 1 leek, 1 carrot, 1 parsnip and some swede for my 1lb of veg. I meant to add some garlic but forgot!
Heat the oil and/or butter in a large heavy based pan and gently saute the veg until a little cooked. I used both oil and butter as the butter can add flavour but remove for a vegan dish.
Add the oatmeal and stir until the fat is absorbed.
Season; I added 0.5 tsp Cayenne, 1 tsp dried rosemary, 0.5 tsp dried basil, 0.5 tsp dried oregano, 1 tsp celery seeds, 0.5 tsp garlic salt and a grinding of black pepper.
Stir in the mushroom ketchup. You could use something like marmite here I guess if you were COMPLETELY INSANE and like the stuff but I'm not a fan personally. (Can you tell?! :-D)
Add the stock and cover. Simmer gently for an hour, remembering to stir from time to time or it'll stick and burn on the bottom. I found it necessary to add extra water from about half way into the cooking time. Probably added just under an additional half a pint. I wanted liquid to cook the dumplings in though and it was plenty thick by the time it was served.
Dumplings Prepare these once the stew is on to simmer, they need approx 30 mins cooking time.
6oz self raising flour
0.5tsp salt
1.5oz fat - I used veggie suet
Sift the flour into a bowl. Add the salt and suet.
Rub the fat into the flour well.
Add water a little at a time until you have a sticky dough. 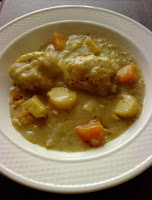 Shape into balls and boil for 30 mins.
I made fairly biggish dumplings so got 9 and they needed more like 40 mins cooking time so aim for about 12 from this recipe, or size as you like adjusting cooking time appropriately.

I thoroughly enjoyed this stew. I know it looks a little 'grey' perhaps but it was thoroughly lovely and cheered me up no end on a miserable evening. I must admit I wasn't sure about the cayenne when I tasted the stew during the cooking but by the end of the cooking time it had faded to the background and just lent a pleasant edge of warmth. The oatmeal had thickened the stew nicely and the long cooking time meant you couldn't really discern it. I'd definitely make this again.
Posted by Ruthdigs at 13:23