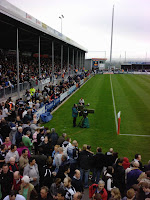 Last night was the first leg of the final against Bristol for a chance for either Bristol or the Exeter Chiefs to go up to the Premiership. So just a wee bit important then.
A sell out game meant 10,000 supporters crowding into Sandy Park stadium and it was pretty busy. Not impossible to get around though and as is generally true with rugby all very good natured.
Well, it was a tough game with neither side wanting to give anything away. We spent most of the first half in our own half of the pitch but managed to prevent Bristol from scoring a try. Half time 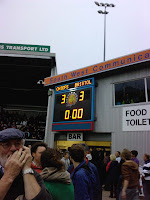 came with an equalising penalty for Bristol leaving us both with a measly 3 points apiece. Both teams had attempts at a try in the second half but none were allowed after consultation with the video ref; Exeter managed to ground the ball first a couple of times right in front of where I was standing to our great relief.
The match ended as a low scoring 9-6 to Chiefs, all points scored from penalties in an uncomfortably close game.Next Wednesday we're up to Bristol although unfortunately I'll have to watch that leg in the pub. We'd have liked to go with a bigger margin but if we can just hang in there as we did last night, prevent Bristol from passing and running then maybe we can win by not necessarily being better than the opponents but by preventing them from winning.
[Oh dear, that almost sounded like our dumbass farce of a recent election...]
All still to play for then.
Posted by Ruthdigs at 18:11