One of the foodie bits I made over chrimble were some filo pastry mince pies. Frankly these are so easy I feel a bit of a fraud giving a 'recipe' so here's a synopsis with pics of the process.

Filo was my choice as t'chap hates pastry having a pathological hatred of fat and has too many times over the years had soggy bottomed pasties putting him right off, I think. I also hate thick pastry - all too often found on bought mince pies, which is a shame as a mince pie is one of the sweet things I like at this time of year. We only had a couple though - the rest came to the pub with us in a much belated return of 'Cake Sunday'. 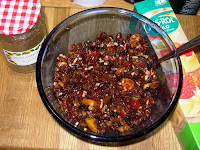 1 Jar mincemeat - mine was homemade from a friend and boozy and gorgeous it was too!
Filo pastry - note that it needs to be removed from the fridge 20 mins before use - I only realised this on reading the box immediately prior to wanting to use it so it had 5 mins on the radiator instead. ;-)
A little melted butter

ts. The size of sheet can vary vastly - I was using 'Jus-Rol' chilled and the sheets are way smaller than their frozen version. [In fact about half size, near enough.] Anyway - cut into sections - 4 for this size sheet. Lay them at angl

es to each other - see pic. Place in case / cake or muffin tin hole - push down carefully. I reuse foil cases as well as using my silicone cases - one of the few useful things I've found to 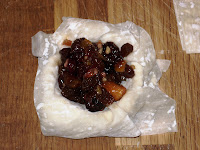 do with them frankly as they stick like gits with cakes. [The silicone ones, not the foil.]
Fill generously [though I may have been a little too generous as I only got 11 from the whole jar of mincemeat!] Brush 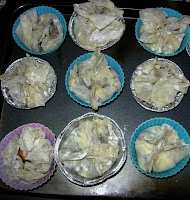 a little melted butter on the edges of the pastry and draw closed, scrunching together.
Bake 10-15 mins until pastry edges are golden.
Cool on a wire rack - be aware that if yo 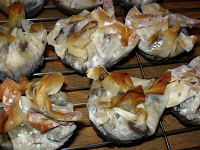 u have accidentally torn the pastry the filling will ooze out at this point until it cools enough to 'glue' itself shut.
Take to pub and share with friends and feel all warm and festive and fuzzy. :-D


Use last cut bits of filo for a savoury mushroom, pesto and blue cheese mix as a treat for Chap for leaving me be in the kitchen even though we were running about an hour and a half late at that point! 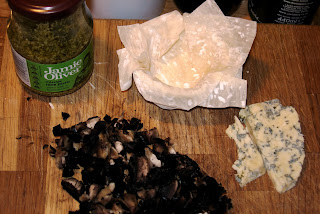