Forage on the coast

As you'll know [if you've been paying attention :-p] we went traipsing on the Dorset coast at the weekend. Whilst there we foraged a couple of items to try once we'd returned home.
Whilst the Chap was poking around various caves in the cliffs (left from the quarrying that once took place in these parts for Purbeck stone) I came across an enclave of Sea Cabbage/Kale plants on the clifftop. Being cognisant of the fact that nationally this is a rareish species I took just 2 or 3 leaves from any one plant. It was good to see that there were a lot of these plants in this area, and I know they've been thriving on this coastline for years as I've been seeing them all my life. I was chastising myself for lack of preparedness as I emptied the top of my bag of camera, purse etc and dumped the leaves in. Really must remember to carry a suitable receptacle for unforseen foraging opportunities like this!
Further on at the top of a set of steps up from the valley 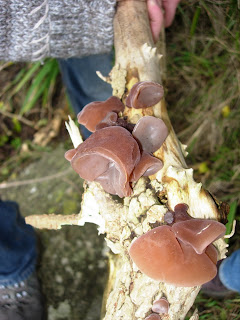 floor to the cliff top the eagle-eyed Chap let out a delighted cry of 'Ears - Jelly Ears' which may well have earnt us the odd look or two had anyone else been foolhardy enough to be out in the howling wind and, at this point, driving rain. Luckily they weren't so were spared the sight of the childlike excitement of 2 fully grown adults exclaiming over the finding of what have been less than charitably described as looking like 'the pigs ears I gave the dogs tonight' on one forum I frequent! Jelly Ear fungus admittedly aren't the most immediately appealing item to pull off a tree and contemplate eating but they are one that it's nigh on impossible to misidentify meaning a safe bet for fledgling foragers to try. We gathered the larger growths, leaving the smallest to carry on; wrapped them in a tissue [it's 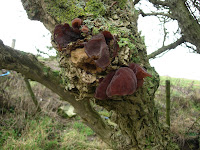 all I had to hand] and popped them in the top of my overloaded bag taking care not to squish them. Further on round our walk we spotted some more but these were old and dried out so after a quick photograph we left them alone.
After our visit to the Square and Compass we headed back down to 'sunny' Devon [ha] - through driving rain, massive side winds and a pea-souper fog. Not fun driving conditions for the Chap.
Safely back home I looked up the Jelly Ears. Whilst we both knew they were edible we weren't so sure what to do with them - I'd had some vague recollection of stewing in milk being an option. [I know - sounding more and more tasty by the moment eh!! :-D]
The River Cottage 'Mushroom' book has this to say:
"The Jelly Ear...is something of an acquired taste. The undistinguished mild flavour and unassailable crunchiness...has proved something of a challenge to western palates. ...used with discretion in a spicy soup or stew where they can absorb the surrounding flavours, their unfamiliar qualities become clear assets."
'Food for Free' advises:
"It should be washed well, and sliced finely, for although the translucent flash is thin, it can be tough and indigestible.
Stew for at least 45 minutes in stock or milk and serve with plenty of pepper. Ensure it is cooked properly, otherwise the flesh will be very rubbery. The result is crisp and not unlike a seaweed."
Doesn't that all make you want to rush out and find some to try yourself?!!
I decided to casserole them for at least the stipulated 45 mins and see what we thought.
A check of the River Cottage 'Edible Seashore' guide had left me fairly certain that I'd collected Sea Cabbage but a *google later has now made me think it could be Sea Kale as most sources seem to use 'Sea Cabbage' to describe a type of seaweed which this most definitely isn't. Anyway, the book mentioned that you want the smallest leaves in Spring time - 'uh oh' thinks I - wrong time of year. Oh well - I did go for the small leaves so we'll give them a try. Lightly boiled they could make a nice 'greens' accompaniment to the Ear Casserole. [I can hear you thinking 'yum'.]
So; here we go with our Dorsetshire Jelly Ear Casserole and Seaside Greens Supper:
Splosh EVOO - about 0.5 tbsp
1 onion peeled and chopped
3 sticks celery chopped
Sprig rosemary - chopped
2 carrots chopped
Swede - approx 7-8oz - chopped

Chop both kinds of potatoes and add to pot.
Prep fungi and add these too. At this point the Chap made the helpful comparison between the sliced fungi and slugs. Not exactly the image I wanted in my head - thanks lovely man!!
Stir all well together.
Splosh in the red wine and sprinkle over the gravy granules then add enough stock to just almost cove 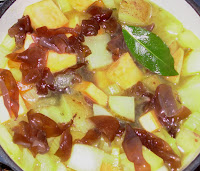 r the veg. As mentioned this took me to a total of 0.75 pint.
Stir again and pop in the oven for 40 mins.
Remove, add beans, stir through and replace in oven for 5-10 mins. 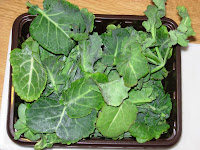 Meanwhile lightly simmer the sea cabbage/kale for 2-3 mins then drain well.
Verdict: hmm - er - well they were right that they don't really taste of a 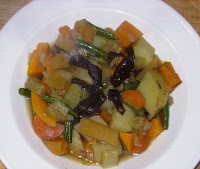 nything themselves. The Jelly Ears had soaked up the flavours of the casserole so worked in that respect. However, they did have a slightly 'slimy' kinda thing going on, and were chewy with it. No sign of the crunchiness both books mentioned - not sure what they meant there? They were edible - no more than that.
Overall - I wouldn't go out of my way to find these again although I think the Chap would like a try at drying them and using in an oriental soup. Glad to have the opportunity to try them and this was our first foraged fungi meal so kinda exciting on that front.
Oh - and the sea cabbage? Bleargh!! This was absolutely vile. No other word for it - or at least no other polite one! I think it's the wrong time of year. I did try a tiny baby leaf - about 1cm size of tiny - and that was ok so I think these will be worth a try as spring baby leaves but now - totally unpalatable. They'd keep you alive and that's about all can be said for them. Very rich in iron the chap said through making faces at the taste.
All in all not a total success then but life is a patchwork of experiences is it not?
I now know not to either gather sea cabbage/kale [whatever the damn stuff is] in the depths of winter nor to post a photo of dubious looking fungi on a forum and expect to get away with it. :-D
*I'm not sure when 'google' became a verb but it now seems firmly ensconced in the national, if not international, conciousness as such if not in the actual Oxford English so I'm afraid it may well get used in this way on these pages. If it makes you wince - sorry 'bout that.
Posted by Ruthdigs at 11:19