I've recently been looking at recipes and thinking about making crackers for myself. Not sure why I've never done it before as it's as simple (if not more so) than making sweet biscuits or cookies. Anyway - this was my first attempt using a recipe from Atomic Shrimp's site.

Preheat the oven - the recipe said Gas 4 but I found this was a little under doing them [I've noticed this before with my oven at Gas 4. :-( ] I ended up turning it up to Ga 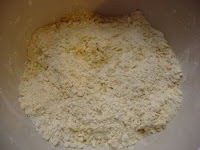 s 5 and got far better results on this setting.
Mix the fat and flour together until it looks like breadcrumbs - the instructions say with a knife but this was going to take me to approximately the end of the century so I used my fingers.
Add the cheese, oatmeal and mustard and mix.
Add the water 1-2tbsp at a time until you get a dough.
Roll out - this can be sticky so flour your board, rolling pin and hands 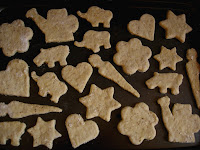 well throughout.
Cut into pretty shapes - hell if you've got interesting cutters use 'em. Mine include a watering can and a carrot, and who doesn't have a hippo and an elephant? :-D
Place onto greased baking tray and bake for 10-15 mins until golden and 'done' looking. As mentioned I found the Gas 4 batch underdone so gave them some extra time but once I whacked the oven up the results were far more satisfactory.
I found these a little dry for my taste but nice nonetheless. After storage in a tin that evidently wasn't as airt

ight as you'd suppose they softened up just a little and I actually preferred them like this. It's all a matter of personal taste though I guess. What it did convince me of is that I really need to be doing a lot more of this cracker making malarkey - so easy and I can already see the vistas opening up of seed, herb & cheese flavour combos. Hmm - I feel a cheeseboard moment coming on...
Posted by Ruthdigs at 13:57