Having had a 'discussion' [ie - not quite an argument] recently about the best way to roast potatoes - in particular concentrating on the oil used; I decided to hold a little totally-non-scientific and arbritrary test as I was making roasties last night. [Yep - we missed the traditional Sunday slot - so?] As my roasts just consist of spuds, veg, yorkshires and gravy the quality of the roast spuds is important. I've always used olive oil and sea salt after my mother [I believe she got this habit from Nigel Slater] but in the aforementioned discussion was being told in no uncertain terms that this was all wrong because of the boil/heat points of relative oils. Well no-one likes being told they're doing it all wrong - especially when it's Ma's recipe so I thought I'd test this out. I cooked 2 dishes of roast spuds - 1 in EVOO and 1 in Vegetable oil. Both were otherwise done in my regular style:


Put kettle on.
Put oven on to preheat to Gas 6.
Put oil in ceramic baking dish and put in oven to heat up.
Wash and chop spuds. Leave skins on. Parboil for 5 mins and drain.
Return to pan and shake about to fluff up edges.
Spoon into dishes with hot oil being careful of splashes.
Grind sea salt over and stir round well with a spoon.
Roast for 1.5 hours, stirring every 20-30 mins.


Here's the final result. On the left are the veg oil, on th 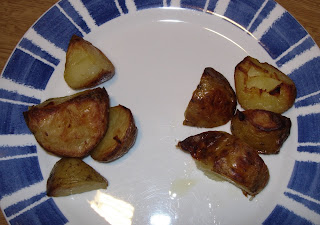 e right the EVOO. Chap thought initially that the veg oil ones looked crispier but I don't see much in it myself. I know I definitely preferred the flavour of the EVOO potatoes. Chap said on initial tasting the veg oil ones then on second try couldn't discern a difference.
Verdict - doesn't make a lot of difference but I prefer the taste of the EVOO ones so will continue cooking them with it.
Conclusion - my friend's talking rot - or at least as far as roasties are concerned!! :-D
Posted by Ruthdigs at 13:19