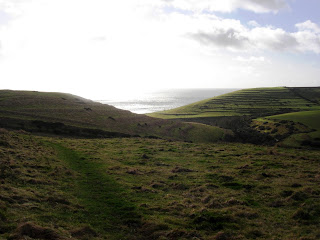 Whilst in Dorset at the weekend I wanted to show the Chap one of my favourite places there on the coast. If you drive through Corfe Castle, turn right and follow the road all the way up through Kingston, drive along the top of the ridge (admiring the view as you go) then turn right again you will end up in Worth Matravers. Park in the honesty car park and from here you can walk down past the strip lynchets (medieval terracing system) to the coast to join the SW coast path . (You can see the strip lynchets in this photo taken in January '09 on a much sunnier day. As I have to admit, several of the photos on this post were. The really grey ones are from this year!) Or you can do as we did and scramble down to see the 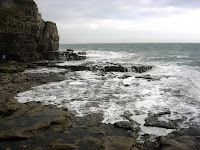 sea at Seacombe. (On the far right of this map.) Now it was, to say the least; a tad windy whilst we were there and the tide was in so we couldn't get all the way 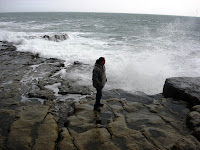 round to where we used to spend many a happy hour as nippers dabbling in the rock pools, but we got to see the place, the Chap diced with the idea of being washed away and we had what I believe would be covered by the term 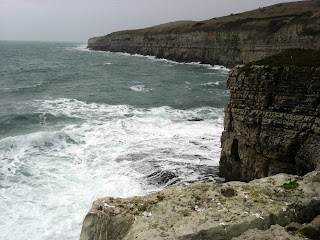 'bracing' walk before retiring back up the [very very muddy indeed] hill to the pub.

Ah the pub - the Square and Compass. This is my very favourite pub, quite possibly also fueled by many memories as a kid of reaching the refuge of it after a similarly bracing [although perhaps slightly more challenging sized 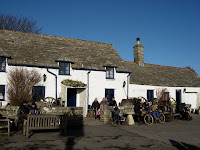 3 feet tall] walk along the cliff tops. It's an old low stone building with a stone roof that nestles into the top of the hillside in Worth Matravers looking down to the sea. It's been in the same family for over 100 years and has appeared in every single edition of the CAMRA Good Beer Guide. They have free range chickens running about and a stone carving festival in the summer. There's roaring fires and a chair made from d

riftwood and branches. There's a bar that's really just a hatch with barrels of real ales behind. There's a mini museum of fossils and local finds collected by the current landlord's father. [Sadly passed away now.] There's a pumpkin carving festival in autumn. There used to be a semi-tame Raven when I was small but it attacked me once so I'm quite happy that's not around any more. It did also stuff an inebriated man's fiver down a drainpipe one memorable N 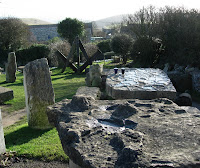 ew Years eve to our geat amusement though. There're tables made of massive slabs of rock in the garden and a lovely view to the sea. There's some of the freshest air I know and quite importantly there are pasties. Just pasties. Only pasties. As in - NO OTHER FOOD but pasties. You have to have a pasty when you go there. It's the law, or an old charter or something. Or it should be. Assuming you've done your bracing walk in the howling gale [did I mention it rained too] then you've earnt a nice hot pasty and a pint, whilst you steam gently by the side of the fire. They're scrummy pasties too; from memory and other's comments now. Served on a paper plate with a choice of sauces at the bar and a piece of kitchen towel for your fingers [though there is cutlery if you want it] this is the proper Square and Compass experience. They even have a veggie option these days so I too can have my pasty with my pint. Bliss.
Go there. Do it now.
Posted by Ruthdigs at 12:49