It's been raining here - a lot. The ground is absolutely sodden, saturation point. 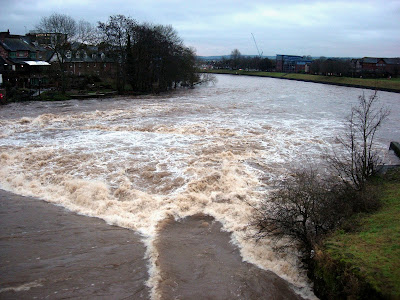 I want to get stuff done outside!! Waah!!
The Chap is continuing to prove his cooking prowess with an adapt 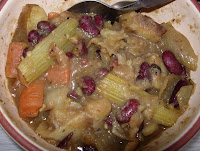 ation of this Roast Vegetable and Bean Stew recipe - I don't have all the details though I know he used the veg he had, blended half (?) ish of the veg into the stock / cider and used red kidney beans; again as this was what he had in the cupboard. I can attest that it's blimmin scrummy!!
Not the best start to the new year for the Chiefs - their away game v Bath on boxing day was postphoned owing to the pitch being frozen. Our first home game of 2011 was v Leicester Tigers [hwak ptooie] on the 2nd January. Despite a valiant effort we lost though we held the Tigers to 15-22 giving us a losing bonus point. I'm afraid no pic of the score as the ground was that packed by the time I'd fought my way half way there [against the stream of people leaving] they had wiped it off. It's the fullest I've ever seen Sandy Park which bodes well for the future of the club.
Boding apart though our last outing was away to Gloucester on the 8th and another loss - this time 37-23 putting us down to 9th on the table. Not really where we want to be but there're another 9 games in the premiership before we start hitting the finals so plenty of time for us to climb back up again. Lets hope so eh?!
Posted by Ruthdigs at 13:17