The Silent Woman - Wareham. A pub not a genuine rarity! :-D

The weekend was spent 'back home' [not sure why I still say that as I've now lived longer away from there than I did there] in Dorset. We had lunch to celebrate little big sis's birthday at the Silent Woman pub just outside Wareham in Coldharbour. [A place which incidentally didn't appear on my road atlas - it's that s 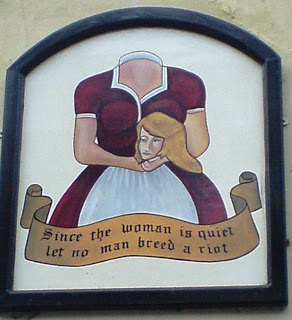 mall.] We've eaten there a couple of times in the last year and a half and the food has always been good. I must admit to being slightly disappointed to see it was the same menu as the last 2 times though but we have always been in the colder months so maybe it's their winter menu...
However, they do have a specials board which always seems to have some good sounding choices on it and this trip was no exception. As well as the various meaty options (beef and guinness pie, some sort of ham hock dish, beef madras, er...) there was a smoked salmon and prawn pasta dish, a mushroom risotto and what caught my eye - *Quorn pieces in a mushroom and brie sauce. As a veggie [or pescatarian to be entirely accurate] I was inordinately pleased to see this and in fact, I can't bring to mind a single other time I've seen a Quorn dish on offer in a pub or restaurant that wasn't specially catering to vegetarians. This made my mind up for me so I really had to choose this. It was a good dish, creamy so somewhat rich - not for those watching the calories. [Mind you if you're eating out you really shouldn't be, at least for that one meal.] The brie flavour came through without being overpowering, which had worried me a little. It was a generous potion and cooked well - Quorn can be ruined if overcooked. Served with a choice of spuds and veg or salad I went for the tarragon saute spuds [not the healthy option again] which were lovely and the stir fried veg which were a little on the greasy side. Overall though a good dish. The others had variously: scallop topped salmon fillet dusted with cajun spices - a hit and the scallops were nice big plump 'uns. This was what I nearly went for had the Quorn not had my allegiance. There was a venison casserole and a lamb casserole (aha - the lamb was the other dish on the specials board). Both went down well also. The final dish of our party was a beef in black bean sauce stir fry with noodles. Said by the Chap to be like stir fry when an English person makes it; apparently the sauce was more of a gravy consistency and the noodles were a bit overdone. Hmm - perhaps they should stick to what they know.
Overall though generally good food, a pretty pub with roaring fires and good Badger beers on tap and the courage to put Quorn on as a main meal choice. Oh and the Silent Woman namesake? In their words:
"Once a smugglers haunt, legend has it that an 'unusual' Landlady (one who talked too much, heaven forbid!) gave away the smugglers' secrets in Wareham market place. Fearful of capture by the ever-present Excise Men, the smugglers silenced her by cutting out her tongue, thus creating that unique phenomenon 'The Silent Woman'. "
Tsk - you can tell a bloke wrote that!!
*Can we assume that after every time I've written 'Quorn' in this post there appears a little 'TM' in the appropriate place. I neither know how to make it 'top-align' [if that's the phrase] nor do I much care. Quorn people - rest assured I have the greatest respect for your product and it's intellectual, market and whatever else integrity. :-)
Posted by Ruthdigs at 17:07